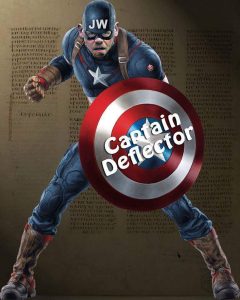 Regarding having a meaningful apologetic for the Christian faith and the text of the New Testament…
The denial of the inspiration of the Pericope Adulterae (the woman caught in adultery in John 8) and the last 12 verses of Mark is a capitulation to Post-Enlightenment, humanistic rationalism and fundamentally undermines the authority of Scripture and the Christian faith.
If the church could be wrong about these texts for over 1,000 years, we shall fail to have a consistent defense for the self-authenticating nature of the Scriptures. Without self-authentication, the Bible would not be a divine book. If the Bible is not a divine book, then we who profess Christ believe in vain.
It’s absurd to think that we can get the titles of the books of the Scripture right but be universally wrong for many centuries about complete, extended narratives in those books. It’s inconsistent to say that we could be wrong about these complete narratives but not about some of the actual books of the canon.
It is precisely here that the doctrine of the text of Scripture is being attacked by unbelieving academia. That otherwise sound men would advocate the removal of these narratives from the Bible simply demonstrates how disconnected from the actual issue most evangelicals have become. It’s not simply then a matter of these narratives. It is what some are conceding about the text of Scripture by their removal.
None of the otherwise orthodox men who would have these passages removed have ever answered this problem. They have mocked it, side-stepped it, twisted it and called it foolish, but they have not answered it. The reason they have not, is because they can not.
However, it is encouraging to see a groundswell of movement back to the Traditional Text among both ministers and Christians in the pew as more and more Bible believers become aware of this problem. God has preserved his word. It is self-authenticating. The sheep hear his voice.

One of those places was a Reformed Baptist group of which James White is a member. White began his own OP as a sort of response to Pastor Truelove.  In his OP, White did not address the very valid issues raised by Pastor Truelove.  Instead, he followed his playbook of offering up more red herrings.  We will deal with those red herrings here.
Galatians 5:17

Here’s a blow up of the verse from Codex Aleph:

A comment about the above from a TBS member in the Confessional Bibliology group:
“Second of all, with regards to Matthew 15.14, the Critical text scholar Tischendorf rules on behalf of the reading of Textus Receptus and the Byzantine Majority text (which is the reading of Sinaiticus). Why? Because of the patristic citations and the manuscript evidence. See the attachment.” 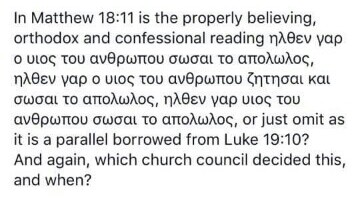 But White’s question about this these two verses is deceptive.  First, as White is well aware, when those of us who hold to the Confessional Text View mention the Church, we are talking about the universal Church and not a church council.  Why he continues to bring this up when he knows full well this is not what is meant is odd.  And we have not said that the Church decides which reading is correct.  We have stated that the Church testifies to the canonical text through its continual usage of the canonical text due to the leading of the Holy Ghost.  And for all his red herrings, that is what he has failed to grasp.  It is not textual critics, who are either liberals or unsaved, that determine the text of Scripture through their arbitrary and inconsistent practice of Counter-Reformation textual criticism.  It his God himself.  And He has done so first through inspiration and He continues to determine the text of Scripture through His Providential Preservation.  A Providential Preservation which is superintended by the Holy Ghost throughout the history of the Church; so that God’s people may throughout history provide a consistent testimony of the authentic texts of Scripture.
White ends his response post with the following:

It is ironic that it is White himself who has capitulated to Post-Enlightenment, humanistic rationalism in his responses.  White answers much as an atheist would that seeks to undermine the credibility of Scripture.  And because he places his faith in textual critics and their unbiblical practices and not in Scripture’s own self-authentication, he does not reason biblically about this issue and thereby discredits himself.