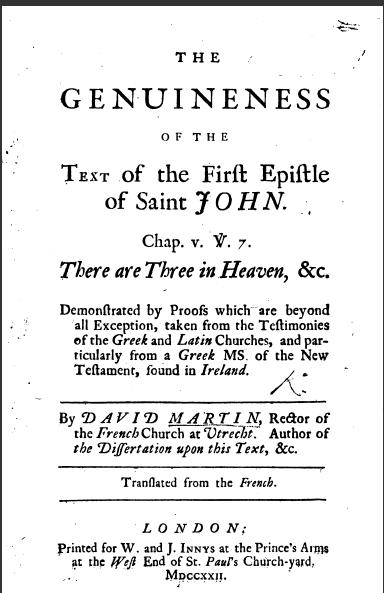 Other quotations of the Italick Verston in favour of the passage in St. John’s Epistle, taken from two ancient Tracts, ascrib’d to St. Fulgentius.

ST. Fulgentius, Bishop of Ruspe in Africk, liv’d in those sorrowful times, when Arianism was upon the throne, and true Christianity very much persecuted. I have set down in my Dissertation two passages where this holy Bishop makes mention of the passage of St. John, but as I have not given the express words, I think it convenient to give ’em here.

After such express quotations of St. John’s passage, let ’em come and boldly tell us it was not in the Italick Version, or that St. Fulgentius had not this Version, which was receiv’d in all the Churches, before his eyes, nor took thence the passages he quoted in his Writings; this will be an unpardonable ignorance in those persons who thro’ prejudice deny a truth which is disagreeable to them; or a want of sincerity, yet worse than that ignorance, shameful in men who profess themselves Scholars.

In the last Editions of this holy Bishop’s Works, and in the ninth Volume of the Bibliotheca Nova Patrum, we find two Tracts under the name of St. Fulgentius. The one is against an Arian Bishop nam’d Pinta; and the other is a collection of divers Fragments against an Arian also, nam’d Fabian.

As to the former Mr. Du Pin; in the article of St. Fulgentius, proves that this Work does not belong to that famous Bishop, and he gives very good reasons, which if they please they may see in the place I have mention’d. Dr. Cave in his history is of the same opinion, and I know no person who has stiffly maintain’d the contrary. ‘Tis at least true, that this Tract is very ancient. The Author, who drew it up, quotes there several Texts of the sacred Scripture in defence of the Trinity, after which he sets down this:  In the Epistle of St. John. There are three in heaven, which bear record, the Father, the Word, and the Spirit; and these three are one.

As to the collection of the Fragments of ten Books, which St. Fulgentius had written, as the Author of his Life says, against the false accusations of Fabian, F. Chifflet, a Jesuit, who publish’d ’em upon the credit of some MSS. does not doubt, but that they really are the Fragments, which some one had collected from the Work of St. Fulgentius. I have no concern to engage myself in this point of Criticism: but I will venture to say, that I find in some of these Fragments such things, as in my opinion, suit not with the character and genius of this learned African. In the third fragment of the first Book we see remarks upon the Greek, unworthy the great skill St. Fulgentius had in that language; and a distinction betwixt the Latin words ministrare and subministrare, which does not agree with such a man, as he was. I leave the stricter enquiry into these matters to those who are Criticks by prosession; I shall here insist no longer upon it. Yet if I have done right in not confounding the Author of these Fragments with St. Fulgentius, no more than with the Author of the Tract against Pinta, the quotation of St. John’s passage in these Fragments, wherein the Texts of Scripture are all taken from the ltalick Version, will be a new proof that this Text was read in that Version.

The title of the 21st Fragment of the sixth Book is, The Trinity in Persons, and the Unity in Nature prov’d from holy Scripture; under this extraordinary title are read these words at the close of the Chapter, The Apostle St. John has evidently said, and three are one, in speaking of the Father; the Son, and the Holy Ghost: this is express.

Upon occasion of the manner, after which this passage is quoted, I return to the quotation St. Cyprian has made in his Treatise of the Unity of the Church; It it written, says he, of the Father, of the Son, and of the Holy Ghost; and these three are one. I see here no difference with the quotation of the Fragment; in the latter, ’tis indisputably the 7th verse since it can only be said of that verse, St. John has evidently said; the consequence tends directly to St. Cyprian, and confirms the reflexions I have made upon him.

If those, who venture to deny the passage we are upon to have been in the Italick Version, have never read the Authors I have quoted, their ignorance in a matter, they ought to be acquainted with before they so resolutely deny it as they do, is inexcusable in Men of learning; and if they have read ’em, and taken notice of the passages in ’em I have quoted, their sincerity becomes very much suspected: this is a grievous dilemma for ’em.